2A, 3A, 4A WIAA State Track & Field Championships

Congratulations Drew Reyes competed in the high jump and he was in the top 8 podium.

Davis & Eisenhower are tied in the 1st place in overall team scores for Day 1. 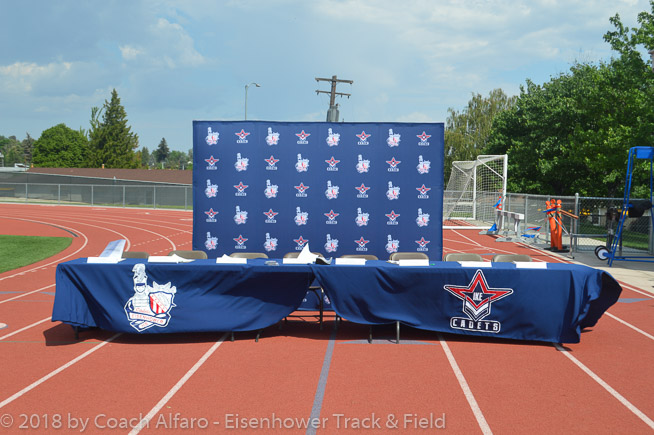 Eisenhower boys are the 2018 Big 9 League Champions and went 6-0 in three years in a row!

Eisenhower boys went 4-0 in the league.

Eisenhower Boys & Girls are 2-0 in the league.

Erica Simison & Jonas will complete on Saturday at Arcadia H.S.

At East Valley H.S. in Moxee Phil English, Track and Cross Country Coach for Eisenhower High School in Yakima is one of the inductees.

Phil English, Eisenhower H.S.
Phil grew up outside a small village in Cullen, County Tipperary, Ireland and graduated from Tipperary
Vocational School in 1973. He started running when he was about 13-years old when a club was started in the local parish. Phil had some success right away and went on to represent Ireland in international competition at schools, junior and senior level in both track and cross country over the next few years. In 1974, Phil was the Irish National Senior Champion in the 3,000m Steeplechase.
Phil attended Washington State University on an athletic scholarship from 1973-1977competing in both cross country and track and field for the Cougars. The team placed in the top-four at the NCAA's all four years. He graduated with a Bachelor of Science in Physical Education in 1977 and also earned a Master of Science degree in Physical Education from WSU in 1979. He has been married to his wife Darcy for 39 years and has a daughter Liza and son Michael (along with four grandchildren).
Since 1986 Phil has been teaching and coaching (cross country and track & field) at Eisenhower H.S. in Yakima. He teaches Honors Biology and a college-level course in Anatomy and Physiology. Prior to teaching and coaching at Eisenhower, Phil taught and coached at Carroll H.S. in Yakima from 1979-1986. Carroll H.S. closed permanently in 1986.
Phil never intended to actually get into coaching. His interests were in teaching and research. However, when he started teaching at Carroll in 1979, the head coaching positions were open in both track and cross country. Teaching and coaching were both parts of the same package at the small Catholic school in Yakima. At the time, he was training for the 1980 Irish Olympic Trials in the marathon.
Phil has had a great deal of success in his career. Among his most notable achievements, he is most proud of helping many individuals achieve a college education by attaining college scholarships in cross country/track & field. In addition to that, increasing the status of cross country in the state through the Clear Lake/White Pass Cross Country Camps and Clinics and forming the weekly seasonal Coaches Polls (started in the early 1990's) have been rewarding.
Coaching Honors
League Titles- Girls (21) Boys (21)
District Titles-Girls (21) Boys (22)
State Appearances-Girls (31) Boys (21)
State XC Trophies-Girls (13) Boys (12)
State Titles-Girls (82, 83, 84, 89, 94, 99, 00, 2010) Boys (85, 87 & 2010)
State Track Team Title- Girls (1999) State Track Runner-Up (2000).
Individual Champions-Kathy Rouleau (82), Kris Vickers (83), Robert Price (83, 84, 85), Robin Bryson (1988) and Aleah Thome (1994)
Nike Team Nationals-9th Place Boys team (2004)
Washington State Girls 'Coach of the Year'-1994& 2001 Monday Morning Quarterbacks, Female Team-'Coach of the Year' 1999, 2000 NFHS National Girls 'Coach of the Year'-2001Yakima Sports Awards 'Coach of the Year'-2010 & 11, NFHS Northwest Sectional Boys 'Coach of the Year'-2011